CNN says we can't determine a baby's sex at birth, San Diego teachers won't be in class to teach US kids, but they will be doing face to face with children of illegal aliens:

In an article reporting on Kristi Noem’s decision to veto the “Fairness in Girls’ Sports” bill, CNN breaking-news reporter Devan Cole claimed yesterday that there’s no way to determine a child’s “gender identity” at birth.

“It’s not possible to know a person’s gender identity at birth, and there is no consensus criteria for assigning sex at birth,” Cole asserted, in a statement better fit for an unhinged opinion article than a news article by a breaking-news reporter.

In fact, as most of us are willing to acknowledge, for all of human history we’ve all relied upon a very simple way of actually knowing sex at birth. The concept of “assigning” sex at birth, far from being based on any “consensus criteria,” is a progressive invention designed to inculcate new parents into believing that a child’s biological sex and gender are sometimes, or even often, misaligned, and that it would be damaging to them to merely accept the reality of their biology at birth.

In an article reporting on Kristi Noem’s decision to veto the “Fairness in Girls’ Sports” bill, CNN breaking-news reporter Devan Cole claimed yesterday that there’s no way to determine a child’s “gender identity” at birth.

“It’s not possible to know a person’s gender identity at birth, and there is no consensus criteria for assigning sex at birth,” Cole asserted, in a statement better fit for an unhinged opinion article than a news article by a breaking-news reporter.....

In the San Diego Unified School District (SDUSD), teachers are being permitted to volunteer to teach migrant children in person this week, while their own public-school students — who remain at home, stuck in virtual learning — are on spring break.

The migrant children are being detained in the county in an overflow facility as a result of the crisis at the southern border. According to a SDUSD spokeswoman, the teachers gave up vacation time to volunteer, but she didn’t address questions about whether they would be paid to do so, as that decision would be left to the county. 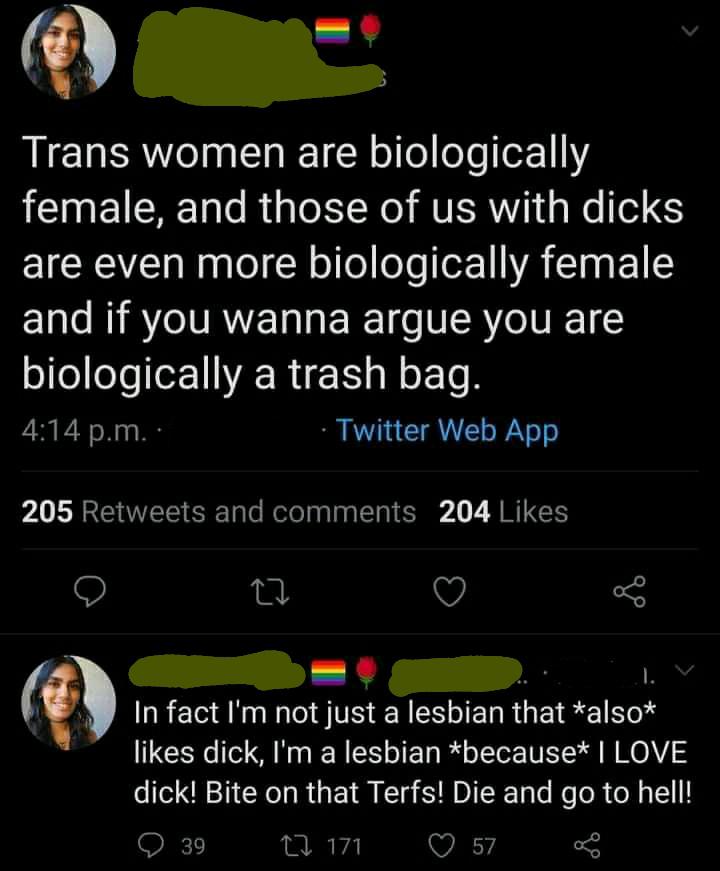 Had to Google terf
Quote

Had to Google terf

Yes, the world is getting too complicated regarding gender for me to keep up.
Quote

How Do I Define My Gender if No One Is Watching Me?


Wait. I thought it was important to be at peace with your own gender identity - now you're saying it's worthless if you don't get any attention from it?
Quote

Well, that depends on if you use tree pronouns.
Quote

Apparently some of the woke folk, not realizing their responses are part of the joke, are upset over the banners...


“Cancel Deez Nuts” and “Chief Wahoo Did Your Mom” banners are reportedly flying behind planes around Cleveland today for the Indians Opening Day festivities, according to locals on the ground who have spotted a variety of messages possibly cooked up in retaliation for a variety of grievances.

Headdresses and face paint have been banned from Progressive Field as the team moves further and further away from its history with Chief Wahoo logo.

“Abusive or inappropriate language or conduct deemed disorderly, unruly or disruptive including inappropriate dress may constitute grounds for ejection or refusal of admission,” the team said in a March 31 release. “This includes headdresses and face paint styled in a way that references or appropriates American Indian cultures and traditions.

“Inappropriate or offensive images, words, dress or face paint must be covered or removed, and failure to do so may constitute grounds for ejection or refusal of admission.”

It appears fakemaskusa.com is behind the banners. On its website, Fake Mask USA says “we’re just a few dudes from Ohio on a mission to destroy cancel culture and help people breathe better.”


Whoever paid for these dumbass banners has the smallest penis in Cleveland pic.twitter.com/6t6LKmo5lY


Danie K
@danie__k
You guys. There are about 10 planes flying around the Cleveland suburbs with banners that say shit like “chief wahoo did your mom” and “make chief wahoo great again” and “cancel deez nuts.” What fresh hell is this?


https://www.outkick.com/planes-carrying ... cleveland/
Quote " Dark humor is like food, not everybody gets it."...Joseph Stalin

Don't get me wrong, I appreciate a good troll job, but not sure I want to throw in with a company (fakemaskusa.com) that sells a product meant to technically comply with the law but still allow you to spread disease with impunity.
Quote

Now even Barack Obama is an “oppressor” who we can’t name schools after:

I don't know how it can happen, but we(the US) have to stop listening to and caving in to the screaming few
Quote

I don't know how it can happen, but we(the US) have to stop listening to and caving in to the screaming few

I don't know how it happened, but that genie is out of the bottle and it's not going back in.
Quote

Lena Dunham is in deeper shit now for selling clothes for fat people (though not the fattest) because she’s made fun of her own fat https://www.huffpost.com/entry/lena-dun ... SSTAND0001
Quote

The backlash against the limited size range of 14–26 was pretty immediate. Now, to be fair to Dunham, I have not seen her refer to her line as “inclusive.” However, 11 Honoré calls itself “a size-inclusive shopping site” in its mission statement — while also listing a size range of 12–24.

I personally don’t believe “inclusive” can apply to sites that cater to a limited size range that excludes both larger and smaller sizes. That position may be somewhat controversial, but to me, “inclusive fashion” looks like a brand like SmartGlamour, by Mallorie Dunn, which has a preset size range from XXS - 15X, but additionally offers complete customization of every piece sold, each of which is made to order.

Jesus Christ. Is the complaint here that the upper limit on her clothing line is size 24?

Yeah, I weigh a lot more than I did when I was 20 but I think I'm doing pretty good if I'm not even a "smallfat."
Quote

UVA medical student questions "microaggressions," gets banned from campus for his trouble:


Kieran Bhattacharya is a student at the University of Virginia (UVA) School of Medicine. On October 25, 2018, he attended a panel discussion on the subject of microaggressions. Dissatisfied with the definition of a microaggression offered by the presenter—Beverly Cowell Adams, an assistant dean—Bhattacharya raised his hand.

Within a few weeks, as a result of the fallout from Bhattacharya's question about microagressions, the administration had branded him a threat to the university and banned him from campus. He is now suing UVA for violating his First Amendment rights, and a judge recently ruled that his suit should proceed.

Here was what the student said.

"Thank you for your presentation," said Bhattacharya, according to an audio recording of the event. "I had a few questions, just to clarify your definition of microaggressions. Is it a requirement, to be a victim of microaggression, that you are a member of a marginalized group?"

Adams replied that it wasn't a requirement.

But Nora Kern*, an assistant professor who helped to organize the event, thought Bhattacharya's questions were a bit too pointed. Immediately following the panel, she filed a "professionalism concern card"—a kind of record of a student's violations of university policy.

"This student asked a series of questions that were quite antagonistic toward the panel," wrote Kern. "He pressed on and stated one faculty member was being contradictory. His level of frustration/anger seemed to escalate until another faculty member defused the situation by calling on another student for questions. I am shocked that a med student would show so little respect toward faculty members. It worries me how he will do on wards."

According to Bhattacharya's lawsuit, the concern card generated interest from an assistant dean in the medical school, who emailed him and offered to meet. The assistant dean assured him that "I simply want to help you understand and be able to cope with unintended consequences of conversations."

Bhattacharya responded that contrary to anyone's assertions, he had not lost his temper or become frustrated with the panel:


Your observed discomfort of me from wherever you sat was not at all how I felt. I was quite happy that the panel gave me so much time to engage with them about the semantics regarding the comparison of microaggressions and barbs. I have no problems with anyone on the panel; I simply wanted to give them some basic challenges regarding the topic. And I understand that there is a wide range of acceptable interpretations on this. I would be happy to meet with you at your convenience to discuss this further.

Then a dean of student affairs asked to meet as well.

Meanwhile, the Academic Standards and Achievement Committee met to to discuss the concern card. This committee voted to send Bhattacharya a written reminder to "show mutual respect" to faculty members and "express yourself appropriately." The committee also suggested that he get counseling.

On November 26, this suggestion became a mandate: The student was informed that he must be evaluated by psychological services before returning to classes. Bhattacharya repeatedly asked university officials to clarify what exactly he was accused of, under whose authority his counseling had been mandated, and why his enrollment status was suddenly in doubt, according to the lawsuit. These queries only appear to have made UVA officials more determined to punish him: Bhattacharya's mounting frustration with these baseless accusations of unspecified wrongdoings was essentially treated as evidence that he was guilty. At his hearing, he was accused of being "extremely defensive" and ordered to change his "aggressive, threatening behavior."

He was ultimately suspended for "aggressive and inappropriate interactions in multiple situations." On December 30, UVA police ordered him to leave campus.

UVA's administration engaged in behavior that can be described as "gaslighting." Administrators asserted that Bhattacharya had behaved aggressively when he hadn't, and then cited his increasing confusion, frustration, and hostility toward the disciplinary process as evidence that he was aggressive. And all of this because Bhattacharya asked an entirely fair question about microaggressions, a fraught subject.

That’s fucked up, sue the shit out of them.
Quote

Wasn't sure where to put this one, politics, Covid or wokeness but the CDC has alerted us to a "serious serious public health threat":

The Centers for Disease Control and Prevention has declared that racism is a “serious public health threat.” Dr. Rochelle Walensky, the director of the CDC, says racism has gone too far and is affecting the “health of our entire nation.”

Following the announcement, the CDC said it will use COVID-19 funding to make “new and expanded investments in racial and ethnic minority communities and other disproportionately affected communities around the country, establishing a durable infrastructure that will provide the foundation and resources to address disparities related to COVID-19 and other health conditions.”

Walensky began by saying that COVID disproportionately hurts communities of color, then quickly dropped this paragraph:.

“The disparities seen over the past year were not a result of COVID-19. Instead, the pandemic illuminated inequities that have existed for generations and revealed for all of America a known, but often unaddressed, epidemic impacting public health: racism.”

Walensky then said that racism is systemic and that we must work overtime to “overcome centuries of discrimination.”