Eponymous Shlinks in the Time of Virus

Coach Coop left UF to be the Recruiting Director at Louisville. He was a big part of landing some big time guys. The rumor is Dallas Baker will replace him.

Coach Coop left UF to be the Recruiting Director at Louisville. He was a big part of landing some big time guys. The rumor is Dallas Baker will replace him.

Speaking of punched out.

Makes no sense to me. If you’re starting for a d1 school in fb, haven’t you already proven your dick is of a sufficient size?
Quote

A friend who worked out all the time got into an argument over a girl he had just met at bar. He insisted they take it outside. Turns out the other guy had served 4 tours in NORTH Vietnam.
Quote

Everyone knows big 12 got no D.

Kyle Pitts is special, and he may be the most talented playmaker in the entire draft. He is nominally a tight end but has shown the ability to win outside and in the slot as a true wide receiver. And that’s not to say he needs to be able to do that because he can’t block. His blocking in-line is more than adequate, and that’s something that typically develops at the NFL level when more is asked of players.

Pitts is one little step of development on his outside vertical release away from being a completely uncoverable weapon in the NFL — a player with a cheat code of a two-way go to either attack the outside vertically or break inside and run after the catch into space. He is already the living embodiment of this in the red zone, where the dual threat of what he can attack causes no end of trouble for opposing defenders.

Pitts may have as clean a tape as any prospect in this draft, and the biggest question becomes how dependent he is on a creative offensive mind to maximize his impact or how valuable he is if he remains just a tight end at the next level. 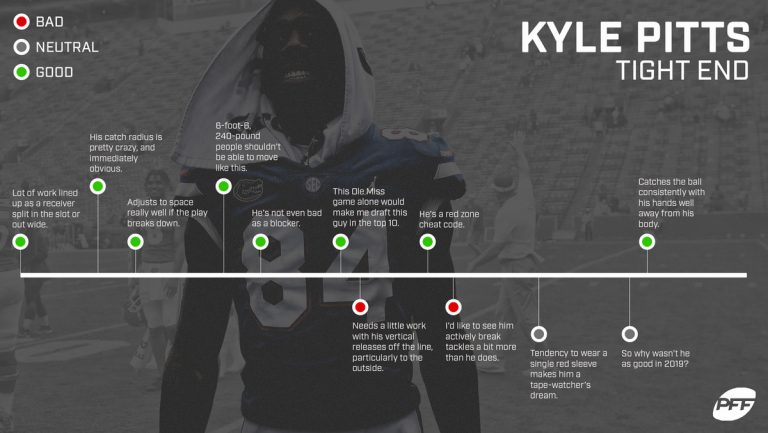 Were they just trying to come up with neutrals?

a player who improves is the kiss of death.
Quote

How many WR's did we have drafted off the 2019 squad? Not enough balls to go around.
Quote

One big lesson I learned the easy way was that you don't judge a book by it's cover. Back in the day when my fraternity held a boxing tournament, our trainer was the equivalent of today's MMA guys, basically a semi-pro kick boxer. Looked like the mellowest wimpy guy you could imagine, but could kick anyone's ass. You would not want to fight this guy in any situation.
Quote


COLUMBIA, Mo. – The No. 5 University of Florida men's swimming and diving team has been crowned the 2021 Southeastern Conference Champions with 1,401 points over five days of competition at the Mizzou Aquatics Center in Columbia Missouri.

The Gators would edge out Georgia, who finished in second-place with 1,324.50 points. Tennessee would round-out the top-three with an overall score of 850.50.

This year's title marks a league-leading 42nd-overall SEC championship, including a current streak of nine in a row. That is the longest third longest streak in conference history (Auburn-16 from 1997-2012, Florida- 13 from 1956-68).

Florida has picked up at least one SEC team title for 43 consecutive seasons – the league's longest current streak.

This is the 248th in SEC Championship school history, more than any other school in the conference.

Florida now has 257 conference titles in school history overall (UF has won nine Lacrosse conference championships, which have not been sponsored by the SEC.

For his performance over the week to help led Florida to the title, Smith was named the Swimmer of the Meet. Smith will also share half of the commissioner's award with Shaine Casas from Texas A&M.

The 5* TE that transferred in from LSU has put his name back in the portal, not sure what is happening with the kid.
Quote

Shit. Did our check bounce?
Quote